Once there were two sisters born with a bond so strong that it forged them together forever. Roa and Essie called it the hum. It was a magic they cherished—until the day a terrible accident took Essie’s life and trapped her soul in this world.

Dax—the heir to Firgaard’s throne—was responsible for the accident. Roa swore to hate him forever. But eight years later he returned, begging for her help. He was determined to dethrone his cruel father, under whose oppressive reign Roa’s people had suffered.

Roa made him a deal: she’d give him the army he needed if he made her queen. Only as queen could she save her people from Firgaard’s rule.

Then a chance arises to right every wrong—an opportunity for Roa to rid herself of this enemy king and rescue her beloved sister. During the Relinquishing, when the spirits of the dead are said to return, Roa discovers she can reclaim her sister for good.

All she has to do is kill the king.

The Caged Queen is the second book in The Iskari series. I absolutely adored The Last Namsara so I was very excited to get my hands on this second instalment. While I didn’t love it as much as I did the first book, it is still a fantastic fantasy book with plenty of action and intrigue.

We first met Roa in The Last Namsara when she married Dax and became the Firgaard Queen. But now, Roa finds that Dax is an absent husband and seems unlikely to keep to the agreements they made in the arrangement of their marriage. When the opportunity arises to free her sister from her bird form, Roa must decide if she will betray her husband and form dangerous alliances with his enemies.

Intrigue, action and romance that seems endlessly on the edge of possibility. Building upon the events of The Last Namsara, The Caged Queen not only fills in details from the previous book, but extends the story of Firgaard and its new rulers. Roa is our narrator and it is through her eyes and history that we readers view the events of the book. Each chapter is divided by a short segment – either a section from Roa’s past or an ancient tale that helps to further understand the details and layers of the world Roa comes from.

The one thing that detracted from my enjoyment of this book was Roa and her inability to decide who to trust. She is supposed to be a master game player, manipulator and reader of people and yet she can’t seem to figure out what is right in front of her nose and what she even suspects. I wanted her to have a back-up plan or some awesome gotcha moment, but instead in the end she must rely on others to do the manipulating and saving.

I look forward to reading the third book in the series, The Sky Weaver, which is set to follow Commander Safire.

Reading age guide: Ages 13 and up. 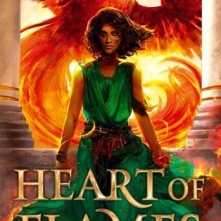